Food and Fruit Festivals in Bulgaria

I provide a range of exciting tours from any city in Bulgaria, offering you the chance to get closer to the local Balkan life by visiting the most interesting colorful Bulgarian holidays! Folklore, dances, traditional costumes and other celebrations, providing not just opportunities for sampling, but much more.

Here’s what you’ll get on each of my tours:

You’ll have freedom to customize every aspect of your tour… from where we start and finish, through to every activity and adventure along the way!
We’ll travel in a private tour bus, complete with a professional driver.
See the traditional Bulgarian festivals that most visitors miss! On one of my tours, you’ll be able to benefit from my unique blend of professional experience and local insider knowledge.
If you’re travelling on a budget, then you’ll find my custom tours are the perfect way to design an optimum itinerary within your price range.

No matter in which city you are located I can design the perfect guided built around your interests and budget. If you want to discover the Bulgarian food festival on your own I’m able to create a detailed self-guided tour for you. Just tell me when you will be in Bulgaria and I will put everything together for your dream tour around my beautiful country. 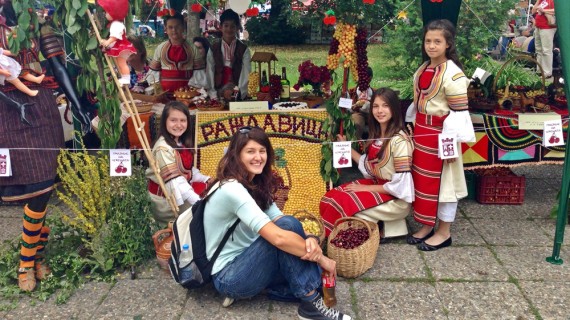 Bulgaria is the blessed land for fruit growing, with climate and soil auspicious for a lot of crops, so food festivals, especially fruit themed, are in the limelight. Besides delighting in local fruit, everyone is invited to participate in these festivals. They give prominence to the fruit grown in each area, and add concerts, folk dancing, exhibitions and competitions to create experiences that all participants treasure

Get in touch with me now!

Start planning your adventure around Bulgaira. Just let me know more about what you want to see and I will show it to you.

Kystendil, in southwest Bulgaria, is a town where the Cherry Festival is held. Besides the scrumptiousness of local cherries, people are invited to marvel at works of art, cherry themed, and the local chefs are unsurpassed in the preparation of pastry, syrup, and jam from cherries. That is an entire world, absolutely cherry dedicated. Those who present their works in the best way and make an indelible impression are the winners at the event.

September is the time for the Plum Festival in Troyan. The town is famed for its plum brandy, celebrated at the festival’s predecessor, the Plum Brandy festival. Now plums are high on the agenda, as the staples for that mountain area. They are eaten fresh, made in jam, or dried. The festival comprises a competition for the best brandy, and the medals for the winners are plum shaped. In the nearby village of Oreshak, center for crafts, celebrations are also massive. Parades are adorned by flags with plums on them.Plum Festival

Bulgaria has its Pumpkin Capital, the town of Sevlievo, in the Balkans. There, people show off not only their culinary talents, but also their skills in preparing decorations using pumpkins, especially at the annual festival. When October come, the Pumpkin Festival invites all aficionados of pumpkins, with delicacies and opportunities to get masks and attend the Pumpkinbourg Train, the carnival. Folklore dances are part and parcel of the celebrations. Creativity is welcome at the exhibitions of pumpkin delights. Participants young and old can enjoy performances themed on pumpkins, usually performed by children. Pumpkin colored balloons are everywhere.

The Blueberry Festival is another event in the picturesque Balkan mountain, near the town of Troyan. Not only eating blueberries, but also other events in the festival attract throngs. People who want to show off eating skills, or skills in preparing delicacies using blueberries, have all the opportunities at special events. Body art is also possible with blueberries, especially at the festival. Folklore is a perfect addition to the events, especially to those held in the vicinity of the Ambaritsa chalet near Troyan. The area of Ambaritsa is perfect for berry picking, and eating freshly picked blueberries abounding there is a supreme delight. Then sleeping in the chalet, or in a tent, will round off a memorable day when everyone realizes the importance and delightfulness of blueberries.