Bulgaria features a vast plethora of Thracian tombs and sanctuaries. They yield lots of information about the ancient culture of Thracians who inhabited these lands. These sites have remained in good condition because almost all of them were buried in hills. The total number of Thracian time hills on Bulgarian territory is over 60,000, but just around 1,000 of them have been researched.

At the foot of the Balkan Range, in the Kazanlak valley, is the so called Valley of Thracian Kings, as archeologists named it. Archeologists think Thracian kings were buried there. In some Thracian tombs, excellently preserved murals are found. Of special interest are the Kazanlak Thracian Tomb and the Sveshtari  Tomb, which are part of UNESCO’s heritage sites.

“Private Guide Bulgaria” organize custom private tours in Bulgaria to the sights connected with the rich Thracian history. The day tours are available from any location in Bulgaria. It’ll be easy to plan a day trip to Sveshtari Thracian Tomb from Varna and Golden Sands or as a part from your itinerary from Bulgaria and Romania. Day trips to the Thracian Kings Valley are available from Sofia, Plovdiv, Veliko Tarnovo and the resorts around Bansko, Pamporovo and Borovets. Alternatively, you could include a visit to some of the Thracian tombs  on the itinerary for a longer, multi-day tour around Bulgaria! 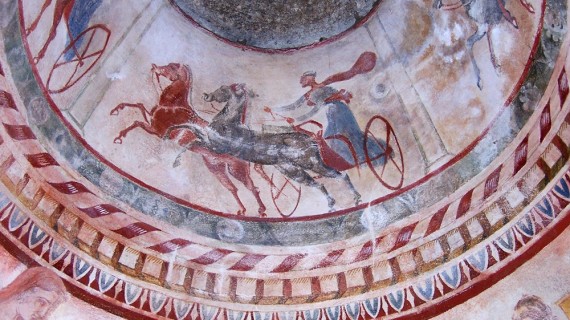 Unfortunately, no Thracian literature survived and most of the things we know about the history of that ancient civilization comes from the Thracian tombs and archaeological sights fund in different parts of Bulgaria.

Want to to visit the Thracian tombs? Just get in touch with me now!

Let’s start planning your custom private tour in Bulgaria together.

The Sveshtari Thracian Tomb is near the town of Isperih, in northeast Bulgaria. It was uncovered in 1982, and on the UNESCO list since 1985. It is also a king’s tomb, dating from the 3 century B.C. It is supposed the ruler called Dromihet was buried there. Its entrance is decorated. The gold and other precious metal objects were plundered in antiquity. Bones of people and horses were found, and on the semi circular wall the king is depicted on horseback, followed by two arms bearers. The vicinity abounds in hills from Thracian times, 26 in number. The whole locality is an architectural reserve.

The Kazanlak Tomb dates from the 4-3 century B.C. It has been on the UNESCO list since 1979. It comprises a burial chamber and a corridor. The tomb features unique murals, both in the corridor and in the chamber. The murals depict scenes from the military and civil life of the Thracian chief, and from the supposed afterlife. These paintings are one of the best-preserved ancient artistic masterpieces from the Hellenistic period reresenting Thracian culture and burial rotuals. It was incidentally discovered in 1994 in a mound at the northeastern end of the town. It was

The Tomb of Seuthes III in Mound “Golyamata Kosmatka”

The Golyama Kosmatka hill, also in the Valley of Thracian Kings, is another large tomb with a corridor and three chambers. It is supposed the famed Thracian ruler Sevt III was buried there. A rich store of arms and women’s decorations were found there, including a gold burial wreath. In front of the corridor there was a sacrificing pit, where a bronze head of a statue was found. These artifacts, plus artifacts found in other tombs, testify Thracians were skilled builders, artisans, potters, etc. They must have added their significant contribution, to enable the development of civilization.

The only representative cult burial complex that was ever discovered dates back to middle 4th century BC. It consist of  six chambers on an area of 100 sq.m. The ceiling of the tomb impresses with its cluster structure and only one preserved image of a graceful female head. The central chamber is carved into a single granite block weighing about 60 tons.

To get a fuller idea of a Thracian complex, it is unmissable to visit Perperikon, 15 km way from Kurdzhali, a town in the Rhodopes mountains. That is an entire Thracian times complex spread on an area of 12 kilometers. The complex is the largest on the Balkan Peninsula. The Thracian sanctuary is on the top of a hill. The so called sacred road leads to the large temple, comprising three levels.